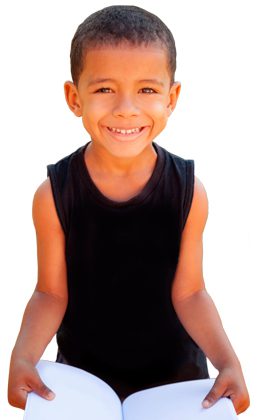 Small and wiry, 5-year old Brandon raced from one room to another on his first morning of summer camp. It quickly became evident that this spirited young boy had difficulty following directions and sitting still to focus was almost impossible. He was unsure of his letters, sounds, shapes and numbers and this made it even more difficult to focus and participate in learning games. Early assessments showed that both his receptive vocabulary (words familiar and understood when heard) and his expressive vocabulary (words chosen to communicate) were below expectations for his age. Brandon was also hesitant to associate with the other campers and did not want to share.

Over the next few weeks, Brandon would have many challenges to overcome. The four learning centers gave him plenty of opportunities to practice new and previously learned skills. Camp Instructors worked with him individually to improve his recognition of shapes, improve his vocabulary skills and gave him the leadership responsibility of line leader with clear instructions of his duties.  Brandon took his task seriously and excelled. As Camp progressed, it was noted that Brandon was developing friendships, often actually sitting and sharing a book with another child while waiting for Parent pick-up. Brandon’s end-of-camp assessment showed that he had grown more than eight months in working vocabulary, a significant gain for a 5-year old.

And, the success has held for Brandon. Wearing a huge smile, his mom proudly shared a recent kindergarten report card which clearly indicated Brandon’s grade level achievement with all As and Bs.  School Readiness is a critical factor in a student’s success.  Children who start kindergarten with age-appropriate language skills, learn to read, pass their 3rd Grade Standardized Tests and are more likely to graduate high school.

This article can be found at UWCF.org where it was originally published. Photo credit: United Way of Central Florida

United Way of Central Florida and the Learning Resource Center work together in a valued partnership to produce lasting change through education and help all students maximize their learning potential.